1.  What the student taught me…

We planned a writing session with the title:

“Write a description of a city/or industrial scene. It should not be a story.” 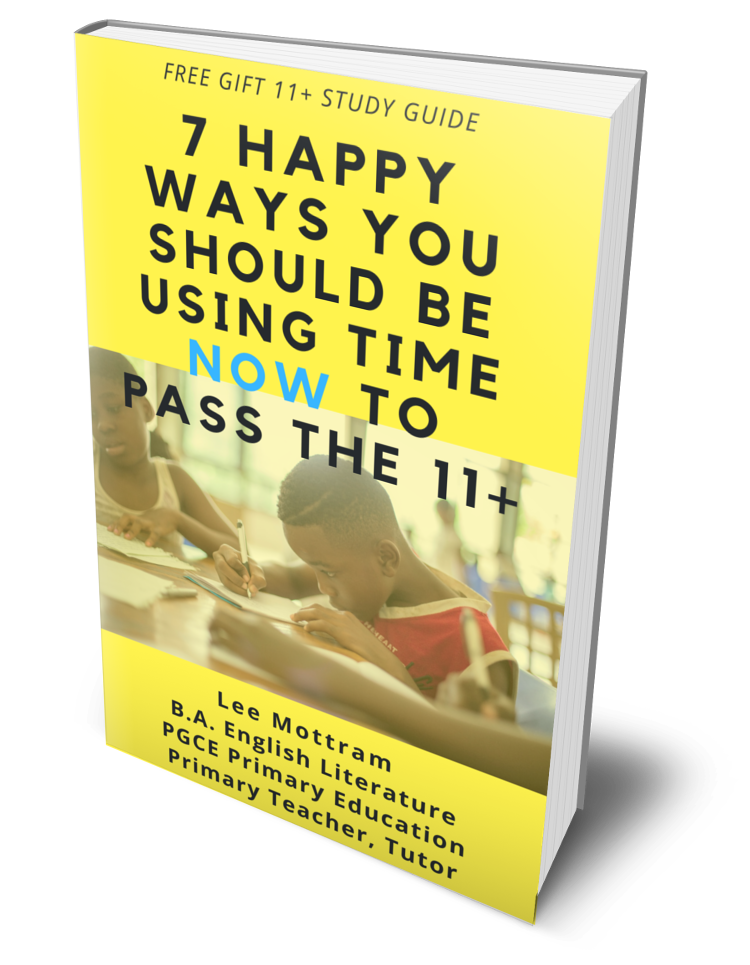 Want to know how much time to spend on the 11+ and what you should be doing with it?

I'll also send you The Weekly Smile - a short burst of 11+ happiness!

We primed our pencils by jotting down the ‘must-haves’ of all great writing. For example synonyms for ‘see-through’ words, similes, metaphors, etc. All good.

Then Lee began. Or at least, he began to begin. But he didn’t actually begin. We looked at some different ways to start, such as focusing on just one detail of the landscape, perhaps a close-up of a new door or pathway, or perhaps a sound. We came up with a handful of options, one of which Lee went for and wrote his first sentence. However, it didn’t switch on the word-tap; he was unsure what to write next, although he was making several suggestions.

Well, in no time at all, we had written almost nothing at all. I pointed out the need to be writing a paragraph in around three or four minutes max, in order to write 6-8 paragraphs in 25 minutes, or 10-12  paragraphs in 40-50 minutes.

We actually stopped the session, as we had given ourselves 30 minutes, which was over, although the writing was unfinished. However, following a multiple choice paper, we came back to finish the writing. His willingness to keep himself going cheerfully increased during the lesson, meaning he wrote the last two paragraphs – large, rich ones that were over half of the whole piece – in 10 minutes. I pointed this out.

That’s when Lee taught Lee the lesson. He pondered aloud:

“The thing is, I always get stuck on how to begin, on what to write first. I keep wondering how I’m supposed to start.”

This confession was the best news of the lesson. Why? Like you need to do with your child, we – or rather he – had identified his problem as one of how to start.

On top of this, he could see how this focus had affected not just the start, but had led to the entire first half of his description being painfully slow to write, as well as being far too short.

I had thought it was more to do with not wanting to write, of putting up resistance. I learned very quickly that I was wrong. Or rather, that I was being too general with labelling it as general resistance. What he taught me was that resistance is not general, it it is often specific.

2. What I wanted to teach the student

1) The start is not about the start. The start is the way to get to the end on time. What you are doing with this essay is finishing it, not starting it.

2)  Fill your first paragraph with lots of techniques and features that show your marker what you know.  Have a metaphor in there, a simile, perhaps a question, some great connectives. Sprinkle in different punctuation. Perhaps some speech. Notice that we are not trying to fill our first paragraph with perfection – we cannot, it does not exist. Your marker is not looking for the perfect, single way to start a piece of writing because there isn’t one way and your marker knows it – there are a million ways and more.

However, you could make a strong first impression if you use several of the features you’ve been taught at school in your first paragraph (and in all others). Your marker will sit up and be on your side for the rest of the essay.

3) Make the decision now to have one strategy to use in every first sentence of 11 plus writing practice, as well as on the test day.

In the exam, there will be no time to make a decision if you already know you get stuck on that decision. Choose one writing feature that will be in your first sentence.

He chose a simile. He loves similes – the ones he writes are always original. That did it. Now, in our next few writing lessons, he will start with a simile, no matter what the topic or style of writing. I don’t mean the same simile every time, I mean a simile every time, which will be different according to the title of the test, as well as his imagination in the moment.

I’ll let you know how it goes, but the take home is if your child struggles to begin, try this starter-busting strategy. Let them choose one feature – perhaps one they love. They agree to start with this feature in every first sentence.

Develop this further if you like by choosing three or four features to use in their first paragraph, plus the same feature for every first sentence, then have them write the paragraph with this goal in mind.

The goal is not a perfect start. The goal is to write a piece that shows the marker what you know in a joined-up, flowing way. Let the next sentence flow from and relate to your last sentence. Let the first sentence be your chosen strategy every time in your practice sessions and see if it helps.

3. What I learned from the lesson

Resistance is everywhere. In an amazing book for grown-up writers, (don’t buy it for your children, but do read it for your own knowledge – it is stunning)

which has helped me many times in my own writing, Steven Pressfield speaks about resistance as a force of nature which wants to stop us moving forward with anything creative, whether it’s writing for an exam or deciding to adopt healthier eating habits.

Some children seem to be caught in its grip more than others; when my daughter was studying for her 11 plus, she would often – until I realised – spend more time avoiding a task than was needed to start and finish the task. She might get stuck on choosing the right pencil, visit the toilet several times, grab a snack, need a drink, do a hand-stand, or have a good old-fashioned mini-tantrum. This could take twenty minutes, when all we wanted was a ten minute exercise on synonyms, or perhaps an equivalent 20 minute essay. I kept pointing this out, showing her the times, and helped her to see that a twenty minute essay now took 40 minutes. Note that we didn’t abandon the essay – it had to be done. Slowly, her resistance faded, and although it never truly left (it doesn’t for any of us!), she learned to recognise when she was getting in her own way and used strategies to just get going.

In this lesson, however, I learned that resistance can be quite specific. My student tied himself in knots thinking of how to start and it froze him.  Dealing with this became straightforward: to use a simile every time, to make the decision now, not in the exam room. I’m really grateful that he put a name to his resistance, as it meant a possible solution could be tried that was very simple to put into practice.

If your child struggles with starts, have an open relaxed conversation with them to see if they can say exactly what it is that stops them. Congratulate them on being clever enough to see it, and then see if you can choose a strategy to overcome this.

View all posts by leemottramtutor

Please log in again. The login page will open in a new tab. After logging in you can close it and return to this page.